From Reef to Rainforest, Cairns has it all! 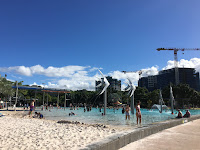 This trip to Cairns was a special one for me, mostly because this was the first time I have ever done a "solo backpacker" style of travel. I have always considered myself independent but this was the real test to see how well I fared on my own and in my own company. Long story short, this trip made me realize I absolutely LOVE doing the whole solo backpacker type thing. I felt so free these past four days and it almost felt a little bit liberating. I had the absolute freedom to decide what I wanted to do when I wanted to do it. 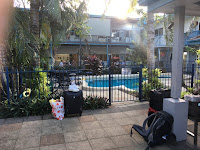 Not only was this my first time by myself, but it was also my first time staying in a hostel. I decided to book myself in at the YHA Central Cairns hostel (pictured to the left). It was a wonderful place and I met some really interesting people. The vibe of this hostel was so laid back and open, it seemed like everyone just went with the flow and was living a life full of adventure and wanderlust. People were really friendly but respectful. It was really wonderful getting to chat with my "roommates" and hearing their stories as well. That is one thing I love about traveling, everyone has their own story and it is always so much fun to listen to where they have been and are going. 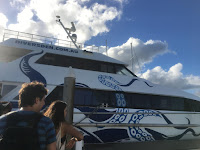 The first day I arrived I didn't have any plans so I decided to go out and see the city. I just so happened to sit next to a nice girl, named Thea, on the bus to Cairns and we got to chatting and decided to venture around together. We walked along the streets, mudflats, shops and night markets till about 7:00PM, said our goodbyes and then parted ways. The thing about solo traveling is that it opens you up to meeting people so that it is easier to find someone else who is solo and explore together. 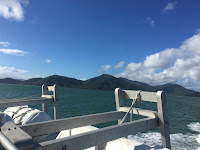 I began my vacation activities on the second day which consisted of SCUBA diving on the outer reefs of the Great Barrier Reef. I decided to dive with the company, Divers Den, because they offered three dives and lunch. All in all it was a really fun time. I enjoyed being able to get in the water again after three months and just be one with the sea. 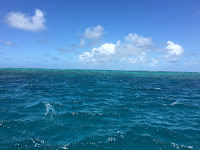 My first couple dives went really well and ended up being a solid 40 mins, however, my last dive was a bit of an...adventure so to speak. I ended up getting paired with three newly certified divers for the first time. About 15 minutes into the dive, the one girl showed me her air gauge and it was at 50 bar (basically she was in the red zone which meant she was extremely low on air). I gave her my spare and turned the dive around. About ten minutes later, myself and my other two buddies were also at 50 bar so I decided to surface us immediately. Turns out the current had pushed us far away from the boat and none of us had the air to make it there. Our final dive ended at a measly 26 minutes and a long swim back 🤣 Needless to say that wasn't the best dive but it was an experience where I had to think fast and make decisions based on my own training. After that, one of the dive company employees asked me if I was looking for a job and offered me to work with them. I was honored that they liked me but sadly had to decline because it was way too far away from school ☹ 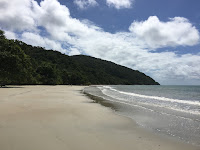 On a side note, I wanted to mention a little bit about the reef itself. This was my first time diving in the farther north GBR and I was really shocked by the state it was in. There was almost nothing there. The first dive site had very little branching corals and almost no fish. The second dive site was a little bit better in terms of coral cover and fish but still didn't have any complex systems. Both dive sites were mostly coral rubble and only housed small fish and invertebrates. There was no sight of any higher trophic level organisms like sharks, turtles, or rays. It really opened my eyes to the awful effects of climate change and how our ecosystems are changing in parallel. 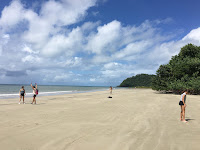 On my third day in Cairns, I visited the Daintree Rainforest and Cape Tribulation beach. It was an incredibly long day tour but we visited some really amazing places. We hit the road around 7:00AM and didn't arrive back at the city until 7:00PM. 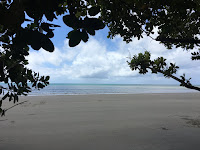 The day started off with visiting a wildlife reserve where you had the option to eat breakfast with parrots. There were tons of cute critters and I even got to share my coffee with a Galah parrot. It was so cute, I put my finger out and it came right up to me and nestled against my hand. After that we headed up to Cape Tribulation where we had lunch and spent some time on the beach. This beach was absolutely gorgeous, the water was so blue and the mountains in the background were so elegant. 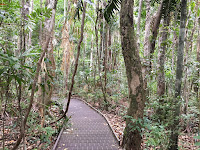 After we departed the Cape, we headed over to the Daintree rainforest. The forest itself was beautiful and every breath I inhaled was so crisp and clean. There were so many different plants and trees growing together, it was a lovely site to see. From then onward, we did a river/crocodile cruise down the Daintree river and were able to spot 2 crocs! Our trip finished up with a stop at the Alexandra Lookout and a scenic ocean drive back to Cairns. 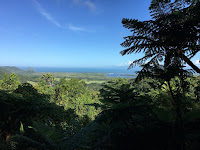 This trip was filled with many new experiences and many beautiful sites to see. If there is one thing I would recommend, it would be to go out there and do a solo backpackers trip someday. Being a solo traveler really allows for a certain freedom and opens you up to so many things.